Time and time again, Nichelle has confronted the pain of not fitting in. Her insight is tinged with profound grief about the root of all this suffering, the dehumanizing cultural norms that box people in. Freeing herself from oppressive norms has been the consistent spark that ignites her creative flame. In fact, it is Nichelle’s search for her own truth that set her on a journey that finally landing her on Long Island. Moving from her native state of Tennessee to take leadership positions, first in Minnesota and then in Illinois, Nichelle confronted pervasive racism from primarily white teachers and administrators who resented her leadership and constantly questioned her credentials: “They saw me as an imposter, a fraud, not worthy of such a role. Ultimately, all Hell broke loose.” When her contract was not renewed, Nichelle relocated to Long Island, by way of upstate NY, and took a school administrator role in Hempstead before moving into her current position at Roosevelt School District.

It seems Nichelle has spent a lifetime confronting the intersectionality of her position as a gay black woman. She spent many years trying to safely negotiate her LGBTQ identity and compartmentalize her life.  It was only when she travelled to Ghana, West Africa, that she was finally able to muster up the courage to write to her family, including her young daughter, that she was gay. That search for a home where she could finally experience a sense of belonging seems to have guided Nichelle both geographically as well as internally. Mapping out her career path allows us to clearly understand Nichelle’s journey across the country that led her to her current Long Island home. But why in her role as artist did she become so emotionally drawn to her work around transgender identity?  Nichelle does explain that these individuals are part of her LGBTQ family and thus deserve respect. However, there seems to be something more specific about their struggle that calls out to Nichelle. Maybe the transgender person’s desire to feel at home within their own body, free from boxes and labels, resonates with Nichelle given her own life experiences.

Pointing to more recent pictures she has painted, Nichelle reflects on her own artistic growth. She points to her choice of subject and use of color. Initially, she started the project thinking she had to give equal time to all races of transgender people. 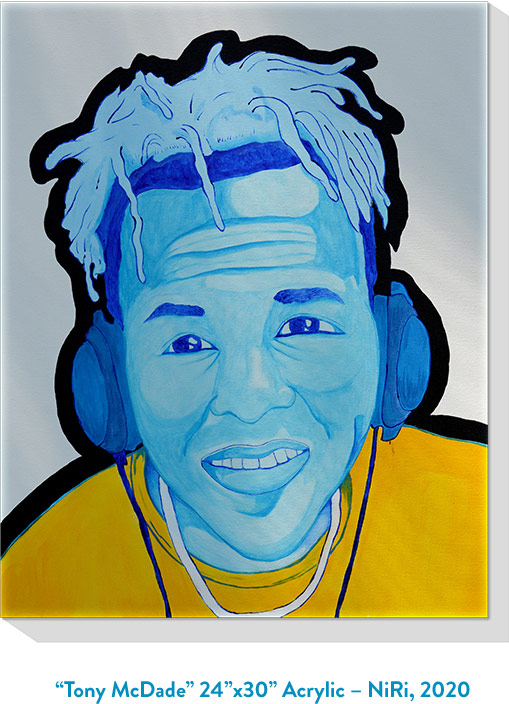 However, as she began researching and learning about her subjects, it became clear that the particular crisis transgender men and women of color experience warranted her total attention. Dismissing ideological rules, notes Nichelle, has been liberating. She also speaks with glee about the freedom to experiment with the “rainbow” of colors. Her use of tone and shade has become subtle and nuanced over time. Her latest painting focuses on Tony McDade, a transgender man from Tallahassee who was shot by a police officer because Tony used a knife to defend himself against an attack by a group of men. She makes a point to explain that his death happened a day after the death of George Floyd.  While she uses blue hues to depict Tony’s face, they are lighter tints and softer tones than the mask of deep blue that accentuates Zella’s facial features.  Tony’s features are more defined: the detail of his eyes, his bright smile, signature headphones painted dark blue against the powder blue she uses to depict his face. Such development in her artistic style indicates her growing ease and comfort with moving beyond external and internal limitations.